High wire vegetable crops – a promise for the future

High wire vegetable crops – a promise for the future

What are high wire vegetable crops?

High wire vegetable crops are a cultivation technique that offers great promises for the future. A high wire system is one in which, the plant is allowed to grow and develop on a single stem. They are particularly useful for greenhouse production of crops like cucumber. Additional lighting may also be provided along with the system which is found to improve plant growth and subsequent yield. Earlier or just after its introduction, the system was seen as expensive with very high initial costs. However, with adoption of certain conventional techniques such as the V shaped cultivation, the costs could be significantly brought down. This made the technique a very economical as well as beneficial system for crop cultivation. 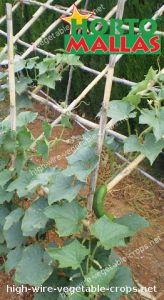 The High wire vegetable crops technique is a good method for that your crops get them a better growth.

Unlike as in conventional farming techniques, the plants or target species are required to be planted in a dense and tight fashion rather than the more relaxed forms. This was in fact, the reason for the high start up costs reported during its initial years. However after effectively dealing with the challenge as mentioned before, the high wire system is now a very cost effective system for cultivation of crops with very high yield per unit area.

High wire vegetable crops show more quality in addition to the very high yield it promises. According to studies involving close analysis of crops from both conventional and high wire systems show a better stability in quality of crops obtained from the latter. Due to this high and constant level of quality observed in high wire vegetable crops and also the very high yield exhibited by them, more and more farmers have turned to the system for better cultivation habits.

Now the high wire is a effective system for cultivation of crops with very high yield.

When using a high wire system for crop cultivation, the plant is actually trained or made to grow on a vertical string or wire with an appropriate system to support it. Usually it is supported with a clip system. It is important to note that in high wire vegetable crops, only the main stem is allowed to grow and develop. All other subsidiary stems and branches are cut off allowing more dense arrangements. The plant is thus allowed to grow this way. But once it reaches the overhead system or support mechanism, the leaves at the bottom portion of the plant are plucked off and the plant is lowered. These steps are done to acquire a more uniform arrangement of crops which in turn ensures better penetration of sunlight into the canopy. This is in fact, one of the reasons for the high yield and better quality in the produce shown by high wire vegetable crops. However, such a system is still prone to attacks by environmental factors like frost, cold winds, hail storms and much more. Other threats include specimens ranging from birds to small insects. To cope up with all these challenges, usually a high wire system is installed with a shade fabric which acts as a frost blanket, hail protection netting as well as an insect and bird netting. 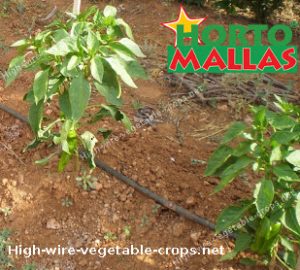 WIth this technique the plant grow on a vertical string.

So to sum it all up

High wire system is thus a revolutionary technique in crop cultivation that can be seen as a result of the advancements made in the field. The system is more efficient when it comes to land utility compared to conventional cultivation techniques. It also offers a consistent and high level of quality in the produce. The combined effect of high yield and superior quality is the reason for the huge popularity the method has acquired over the years. Today, it is adopted by farmers all across the globe and the method still promises a lot for the future.